Unity 3D is a game engine that is popular not only among indie developers but the big companies aswell.

It features a user-friendly interface, a powerful Rendering pipeline, an easy-to-use component system and lastly, it supports a wast array of platforms.

But with an easy-to-use interface it's even easier to overcomplicate your game (for example by placing alot of unncesessary objects etc.), so it's important to have optimization in mind during the whole course of development.

So here are an important tips for 3 major categories (Rendering, Scripting and Audio) that will help you improve the performance of your game:

Unscaled objects are those that have a scale of (1, 1, 1). In that case Unity does not have to do additional calculatinons to rescale the object each frame.

Example: Let's say you have a model of a house which is too big or too small for your level. The natural thing to do is to scale it like this: 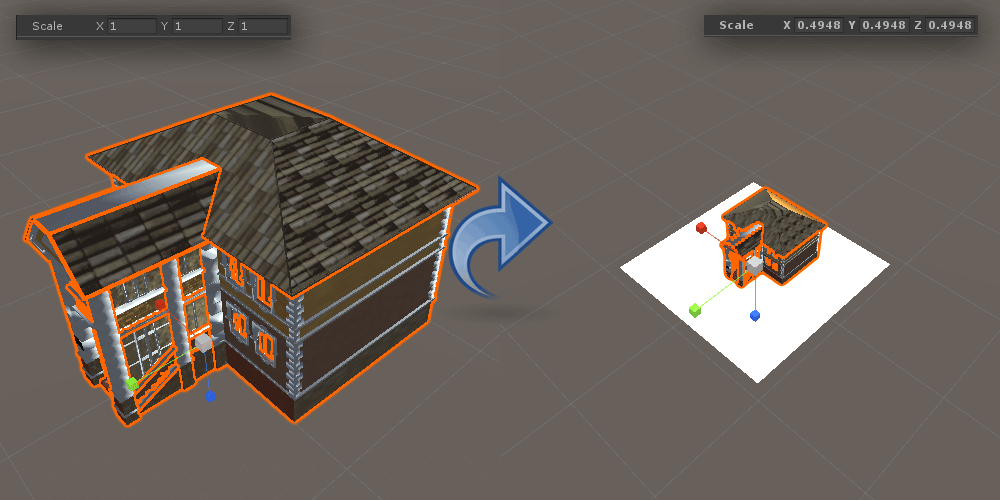 Most of the time it's Ok to scale the object in Scene view, but if you plan to have alot of duplicated instances of that object it's preferable to change the scale in the Import Settings. 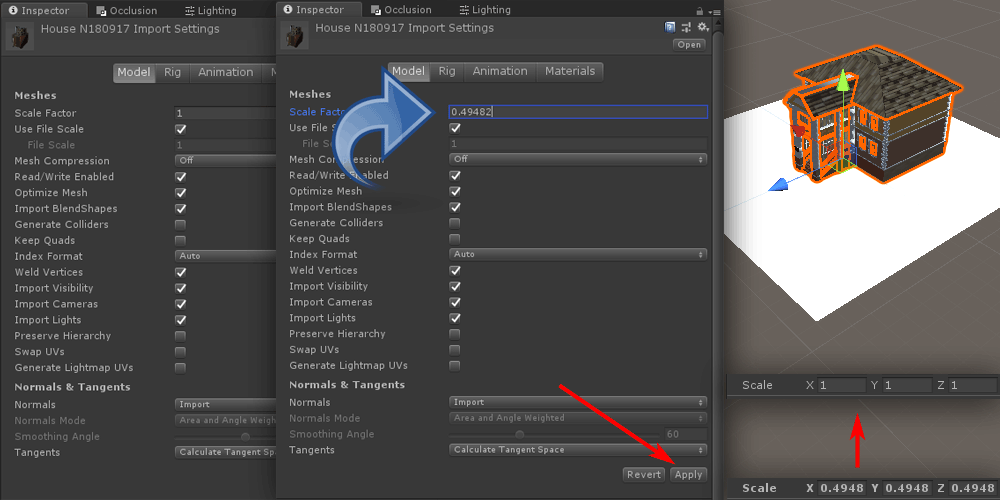 The object is now scaled the way you need while preserving the default (1, 1, 1) scale.

This tip is especially important for animated objects that use SkinnedMeshRenderer as this component is more expensive to render, and having a scale of (1, 1, 1) simplifies the rendering process.

Tip 2: Use as few lights as possible

Generally you don't want to have more than 1 directional light per scene and for a spot and point lights try to have as few as possible (or none at all).

In terms of realtime shadows, while it enhances the visual aspect of the game, it has a high performance overhead so generally it is better to disable them or bake them into lightmaps and light probes.

Tip 3: Use Transparent Shaders with caution

Only use Transparent or Particle Shaders on surfaces that need to be transparent (ex. Fences, Smoke Particles etc.)

Objects with transparency require an additional rendering pass which could reduce performance, especially on platforms with limited resources, such as Mobile or Web.

You should always cache component references if you plan to access them every Update.

For example check the script below:

Here we have Script1 which get's the variable "someValue2" from Script2 and assigns it to a local variable.

Now, calling just one GetComponent each frame won't have any impact on performance, however you should adopt a habit of caching the components that will be used frequently.

Much better, Script2 can now be accessed each Update without performance overhead.

Do the same for built-in components, such as BoxCollider, Rigidbody etc. (except Transform and GameObject, those are already cached by default so you can access them right away).

Tip 2: Use SendMessage with caution

SendMessage let's you call a specific function (if exist) on every MonoBehaviour that is attached to a game object.

For example when you shoot a weapon in the game you can quickly inflict damage when the bullet hits the enemy, without the need to use GetComponent and other extra stuff.

However this method should not be called too frequently as it's really slow.

GameObject.Find, GameObject.FindWithTag and GameObject.FindGameObjectsWithTag let you quickly search for the objects in the Scene. These methods are much slower than GetComponent and should only be used during initialization.

Historically OnGUI was the only way to make menus in Unity 3D. But since then, an alternative was added called UI Canvas which is much better in terms of performance, but may be a bit tedious to setup.

Nevertheless OnGUI still remains a viable way to make UI in Unity and if you absolutely need to use it, keep in mind that OnGUI is called atleast twice per frame (twice as much as Update and LateUpdate) so do not use it for any calculations besides UI.

One thing you can do, is to have a separated script that only has OnGUI in it and enable/disable it when needed.

Both UIScript and Script1 are attached to the same GameObject. Script1 controls when to show the menu.

While UIScript is deactivated, OnGUI method is not called which in turn improves performance.

For the Audio optimization please check the article below: