Audio in Unity has a big impact on performance and the wrong import settings can drastically reduce the framerate, so it's important to keep that in mind when importing the Audio Clips to your project.

Usually there are 3 types of sounds: those that are played frequently, periodically/rarely and the ambient sounds.

Each type requires a correct import settings for the best performance.

For example in my project I have 3 sounds with a different purposes, and as you can see all of them have default import settings which are not suitable for every sound type. 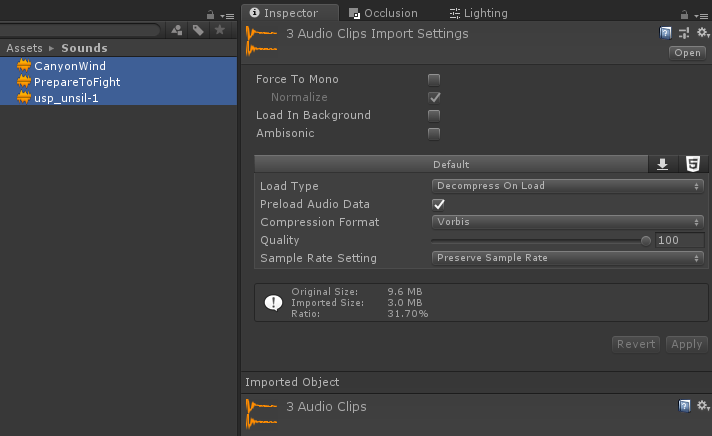 These are the sounds that are played in large quantities (ex. weapon sounds, footsteps, impact sounds etc.).

Such sounds work best with the following settings (These settings are also suitable for any short sounds that are under 10 seconds, even if they are not played frequently):

(From Unity documentation) ADPCM: This format is useful for sounds that contain a fair bit of noise and need to be played in large quantities, such as footsteps, impacts, weapons. The compression ratio is 3.5 times smaller than PCM, but CPU usage is much lower than the MP3/Vorbis formats which makes it the preferrable choice for the aforementioned categories of sounds.

(From Unity documentation) Compressed In Memory: Keep sounds compressed in memory and decompress while playing. This option has a slight performance overhead (especially for Ogg/Vorbis compressed files) so only use it for bigger files where decompression on load would use a prohibitive amount of memory. The decompression is happening on the mixer thread and can be monitored in the “DSP CPU” section in the audio pane of the profiler window.

Usually background sounds are over a minute long so the settings above are not be suitable for these types of sounds.

The settings below should be applied to the sounds that are over 1 minute long.

Load Type: Streaming (or Compressed In Memory if you are targeting WebGL)

Compression Format: Vorbis (Adjust the Quality according to your needs)

(From Unity documentation) Vorbis/MP3: The compression results in smaller files but with somewhat lower quality compared to PCM audio. The amount of compression is configurable via the Quality slider. This format is best for medium length sound effects and music.